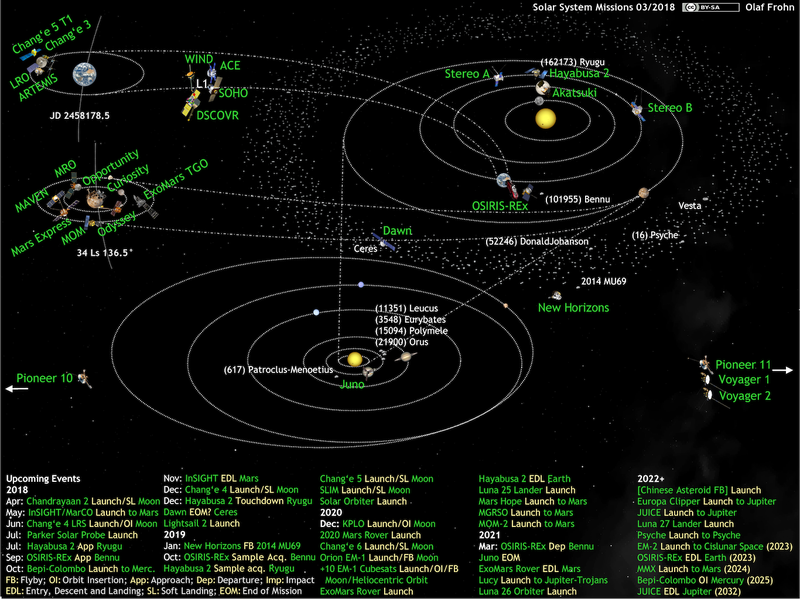 Mars became a fair bit busier this month, with no less than three missions—each from a different country—having arrived at the red planet over the past few weeks. The UAE’s Al-Amal and China’s Tianwen-1 spacecraft entered orbit earlier in February, and NASA’s Mars 2020 mission successfully landed on the Martian surface on February 18. This is the largest collection of spacecraft to visit Mars since 1973, but unlike the mixed success seen by the four Soviet spacecraft sent 47 years ago, this month’s fleet has been successful in their respective missions.

Starting with NASA’s Mars 2020 probes, Perseverance and Ingenuity  successfully landed on Mars on February 18. Having been built by the same engineering team as the Curiosity rover that has been roaming the planet since 2012, Perseverance is much like its predecessor, but has improvements incorporated into its design from the lessons learned from Curiosity’s time on the Martian surface, such as having more robust wheels to avoid the same damage the older rover’s wheels suffered.

Perseverance’s mission will focus on looking for signs of previous Martian life, with an eye on environments that might have once been suitable for microbial lifeforms, along with biosignatures that these ancient creatures might have left behind. Perseverance will also test the Mars Oxygen ISRU Experiment (MOXIE), a prototype technology that is designed to extract oxygen from the carbon dioxide-rich atmosphere, to test the feasibility of using similar technologies for future human missions to Mars. Perseverance will also extract samples from Martian rocks and deposit them on the surface in protective containers, to be retrieved sometime int he future by an upcoming mission.

The rover is accompanied by a new addition to NASA’s exploration fleet: a miniature helicopter named Ingenuity. With a four-foot (1.2 meter) span, Ingenuity’s twin rotors are designed to propel the small craft over 90-second, 50-meter (160-foot) hops to scout ahead of Perseverance’s path, helping mission planners choose the best route for the rover. Ingenuity’s ability to fly, even in the sparse Martian atmosphere, makes it the first aircraft that has been sent to another world.

China’s Tianwen-1 (“Heavenly Questions”) entered Mars orbit on February 10, just in time for Lunar New Year—albeit 200 million km (124,300,000 miles) from the nearest celebrations on Earth—two days later. Tianwen-1 will spend the next two months studying a potential landing site in Utopia Planitia from orbit, and if all goes according to plan will attempt to land a rover in May or June.

Tianwen-1’s orbiter carries sensors such as high-resolution cameras, a magnetometer, spectrometer, subsurface radar, and particle analyzers; the rover is also equipped with ground-penetrating radar that can see to a depth of 100 meters (330 feet) below the surface; instruments for recording the weather and Mars’ magnetic field; and a complex spectrometer for determining the composition of the Martian soil. If successful, China will be the fourth country to conduct the soft landing of a probe on Mars (after the USSR, US and UK), and only the second to successfully deploy a rover.

But the day before Tianwen-1 arrived, the Emirates Mars Mission’s Al-Amal (“Hope” in Arabic) spacecraft entered orbit around Mars, to study the planet’s daily and seasonal weather cycles, weather events in the lower atmosphere such as dust storms, and how the weather varies across different regions of the red planet. Although commissioned, planned and operated by the United Arab Emirates Space Agency, the probe was designed and built at the University of Colorado, Boulder, with support from Arizona State University and the University of California, Berkeley.

Hope’s mission was designed to address gaps in knowledge about Mars identified by from the Mars Exploration Program Analysis Group, a NASA-led international forum, leading the Emirates Mars Mission (EMM) team to focus on a detailed study of Mars’ atmosphere, including its composition, weather and seasonal cycles. This study is intended to gather new clues as to why Mars’ present climate is dramatically different from the one it had billions of years ago, and why the planet is losing hydrogen and oxygen into space.

Misabar Al-Amal (The Hope Probe) is the first Arab probe to reach Mars, and its success makes the UAE only the second country to have a spacecraft successfully enter Mars’ orbit on its first try.

Subscribers, to watch the subscriber version of the video, first log in then click on Dreamland Subscriber-Only Video Podcast link.
2021-02-18
Previous Headline News Post: Whitley to Give a Major Talk at the Virtual Conscious Life Expo
Next Headline News Post: US Weather Catastrophe: Why is It So-o-o Cold?