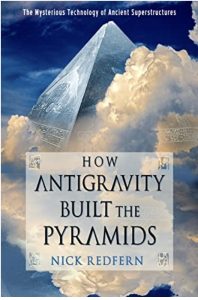 The sinister death of Morris Jessup, the disturbing story of the Hexan Children, the mystery of the Dragon Project and the CIA’s Operation Often…and how the ancients moved gigantic stones. But how do they connect?

We know that whoever could move those stones stopped work very suddenly. We also know that black magic has played an unexpected role in modern technological development.

What could have moved the great platform at Baalbek in Lebanon which weighed 1,600 TONS, the equivalent of TWENTY-SIX Abrams M1 Tanks?? Or the Pyramids and so many other sites. And why, across the world, did the builders suddenly quit, often leaving half-cut stones.

But how do you get from Morris Jessup, the Hexan Children and eerie organizations like the Collins Elite and Operation Often all the way back to these ancient mysteries?

A suggestion: listen to this show!

You can get to know Nick better at NickRedfernFortean.

And get this great adventure of a book by clicking here.

How about growing wiser and better informed and having a great time doing it? Subscribe to Unknowncountry right now. Click here!