First, Starfire Tor on the Amazon Fires, then Joseph Farrell on the “Deep State,” Child Abuse and the Human Soul

Home  »  Dreamland Podcast   »   First, Starfire Tor on the Amazon Fires, then Joseph Farrell on the “Deep State,” Child Abuse and the Human Soul 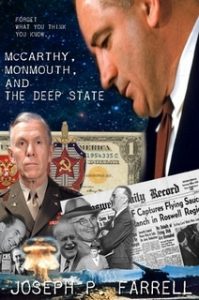 In this astonishing and important edition of Dreamland, we first talk to Starfire Tor, whose Amazon Rain Forest Mission attempted to create rainfall in the Amazon Basin last week. This happened, and as it is the dry season, it was quite unexpected.  To see one of the stories confirming Starfire’s claim, click here.

Then Joseph Farrell goes deeper than he ever has before into the nature of the dark presence that lurks behind the deep state and seeks through its manipulation of governments and hidden yet powerful individuals to undermine human freedom and ultimately to destroy mankind. He and Whitley are deeply kindred spirits, and together the shine light into some very dark places during this hour and a half. Much of it is never before heard material that is going to enlighten you and thrill you. For example, there is an incredible discussion about what Joseph found when researching Joe McCarthy and the notorious Army-McCarthy hearings. But it’s not about communism and abuse of power at all. Incredibly, its completely new material about the Roswell Incident, discovered in recently declassified documents that only an researcher like Joseph would be likely to spot.

A note from Whitley: The term “deep state,” as used here has its original meaning, not the current meaning that has been ascribed to it by those wishing to disguise its reality by altering the definition of the term. An example of “deep state” as we mean it is exemplified by the “Finders” controversy of 1987. A group of apparently feral children were found in a park in Tallahassee, Florida in 1985. An attempt by the Treasury Department to investigate the organization responsible for them resulted in CIA claiming a national security issue and stopping the investigation. It is this “deep state” that we are talking about here, not the fallacious re-definition of the term that is actually a way of concealing it.

In the subscriber section, the discussion of Jeffrey Epstein, child abuse cults among the rich and powerful and the horrific unsolved mystery of “the Finders” will make you think more deeply than ever about the nature of good and evil in our world, and how important it is to live a good life that cherishes the needs of others and respects the value of the human soul and the Earth itself.

Joseph is now a self-publisher so that only he is responsible for the content of his books. This stunner is available on LuLu.com in paperback for $21.50 and worth a fortune! To get it and his other great titles now, click here.