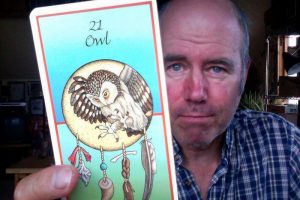 Mike Clelland appeared most recently on Dreamland on December 16 to tell us about the connection between owls, owl symbolism and close encounters.

Mike is among the most articulate of witnesses, and now he returns with the single most profound, powerful and incisive discussion of close encounter that we have ever produced. You will never have heard anything like this unforgettable journey into the truth about the experience, its connection to so many other occult experiences, and its immense power to change not only witnesses, but also people who explore it with an open mind.

What is the relationship between close encounters and visions of the dead? Why do so many close encounter witnesses find themselves challenged to the core of their beings, even, as both Mike and Whitley know all too well, to the point of suicide?

This will open your heart and change your mind, leaving you empowered in a completely new way, with new understanding.

Next week,  Whitley will continue the discussion by turning to the therapist who was responsible for the hypnosis session that led to this interview, Lorraine Flaherty.

Don’t miss this two-week special. It will open your eyes and your mind as never before.

Visit Mike at HiddenExperience.Blogspot.com, learn about his work and find out how to order the Messengers!