Danger in the Night: Big Cat, Bear, Bigfoot–No, this is Paul Sinclair Country: We’re Looking at a Werewolf! 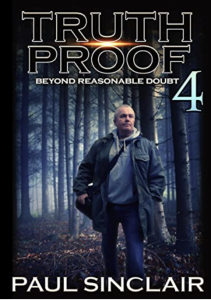 Paul Sinclair is a well-known and well-respected researcher into unexplained phenomena, based in a fishing town on the East Yorkshire coast of England. Paul was inspired by his own inexplicable experiences to investigate further into the meaning behind them and why they seem to be concentrated in certain geographical areas.

We welcome him back to Dreamland for another riveting discussion, this time about his newest book ‘Truthproof 4 – Beyond Reasonable Doubt’, and the incredible material Paul came across while conducting his research for it. Among other things, you are going to hear the weirdest and most convincing story of what might have been a werewolf that has perhaps ever been told–let alone experienced by two men trying to enjoy a peaceful camping trip!

Paul and Whitley’s discussion will take you on a journey through the world of the unknown, including a werewolf sighting in Broxa Forest, a huge flying pyramid in Wales that resulted in some sort of apparent extensive military action, the possible existence of a seventh sense, sheep mutilations that work just like US cattle mutilations, and a fisherman who had a time slip while fishing for cod.

Paul’s recounts may seem like a series of strange campfire horror stories, but they’re completely, terrifyingly and incredibly REAL!

Subscribers, to watch the subscriber version of the video, first log in then click on Dreamland Subscriber-Only Video Podcast link.
2022-05-27
Previous Dreamland Podcast Post: Whitley on the Congressional Hearings and Series of Shocking Personal Experiences He’s Just Had
Next Dreamland Podcast Post: Changed in a Flash: One of the All Time Great NDE’s AND a Bigelow Winner!