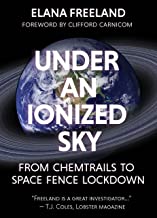 Both subscribers and free listeners will get the full audio of this special.

Some will say that we’re going too far down the rabbit hole this week, but that’s a big part of our job here on Dreamland! There is significant evidence that chemtrails are a real phenomenon, that 5G has negative health effects, that Morgellon’s Syndrome is not a psychological disorder and the full story of Coronavirus has not been told. So, let’s explore, and to do that we call on Elana Freeland?  She has written deeply researched books on chemtrails, HAARP and the military concept of “full spectrum dominance” and what that means to those of us on the receiving end, and this week we find out what she believes all of this means.

As always, with his unique background, Whitley delves into these subjects in ways that other hosts simply cannot. Thus you will hear a deep discussion about everything from his early experiences with the predecessor to MK-ULTRA to Elana’s explanation of how the Finders scandal of 1985 and more recently how Jeffrey Epstein and his Lolita Express may be connected to a legendary horror story about something known as adrenochrome.

Keep up with Elana’s work on her website, ElanaFreeland.com and get her books through us by clicking here!

Elana will be appearing at various venues in California starting on February 14. Don’t miss this unique opportunity to listen to her and meet her. Learn more here.

Next week: Linda Moulton Howe opens the door to Antarctic secrets as never before!

January 22, 2021
Dreamland Podcast
What is Memory, What is Time, Where is the Future?
January 19, 2021
The Experience Podcast
Is It Time To Go For Good?
The Unseen Podcast
Laura London, UFOs, and Carl Gustav Jung
January 15, 2021
Dreamland Podcast
A Revolutionary New Way to Understand and Use Intuition
January 12, 2021
The Experience Podcast
What Really Happened In Rendlesham Forest