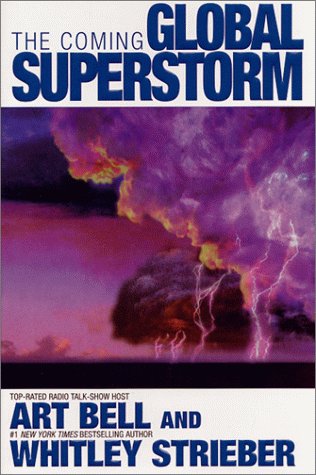 This brilliantly prophetic book gave a new word to the English language: Superstorm.

Killer tornadoes. Violent tropical storms. Devastating temperatures. Are these just the prelude to an unprecedented environmental disaster in our near future?
Two of America's leading investigators of unexplained phenomena -- Art Bell, the top-rated late-night radio talk-show host, and Whitley Strieber, No. 1 New York Times bestselling author of Communion and the legendary Nature's End -- have made a shocking discovery based on years of research with top scientists and archaeologists from around the world. Now, they reveal what powerful interests are trying to keep hidden: rapid changes in the atmosphere caused by greenhouse gases have set humanity on an incredibly dangerous course toward a catastrophic change in climate in the immediate future. It will begin with a massive, unprecedented storm that will devastate the Northern Hemisphere. This will be followed by floods unlike anything ever seen before -- or perhaps a new Ice Age. They also unearth evidence that this has happened in the past -- in fact, that it has occurred regularly throughout geologic history, but so infrequently that our only record of the last such storm is contained in ancient myths and flood legends.

The feature film The Day After Tomorrow was based on this book.

Subscribers, to watch the subscriber version of the video, first log in then click on Dreamland Subscriber-Only Video Podcast link.
2020-04-15