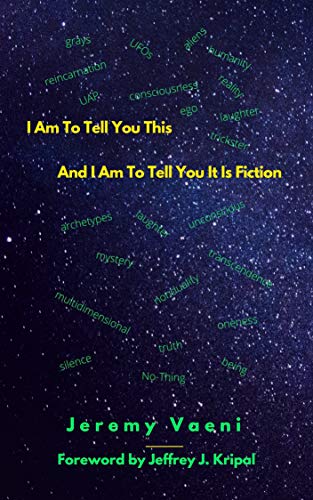 With his 2003 debut, I Know Why The Aliens Don’t Land!, Amazon best-selling author Jeremy Vaeni redefined what an alien abductee sounded like. Not one to sit meekly in the shadows while some researcher told an audience what his bizarre experiences were, Jeremy offered the depth, humor, and raw honesty sorely lacking in ufology.Now, as he attempts to write its sequel, he can’t shake the feeling that he’s just going through the motions. Thankfully, there are deeper forces at work who don’t want him to write that book, anyway. They want him to write a better one. What emerges is a book unlike any you have ever read before. I Am To Tell You This And I Am To Tell You It Is Fiction sets a new standard for what it means to think deeply about alien abductions, the multiverse, the afterlife, and the life we’re living now. And it does so wrapped in the author’s trademark, wildly inappropriate sense of humor.

Subscribers, to watch the subscriber version of the video, first log in then click on Dreamland Subscriber-Only Video Podcast link.
2020-09-15